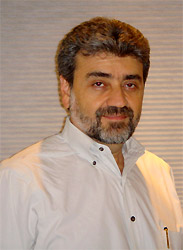 Alexander D. Kofinas, MD, ArMel Scientifics Center for Technology & Public Policy Research Associate on Medical Diagnosis and Treatment, is Director and Founder of Kofinas Perinatal, a clinic for the treatment of pregnancy disorders. The clinic has facilities in Brooklyn and Garden City, New York.

Dr. Kofinas is among a small number of physicians who are board certified in both Maternal-Fetal Medicine (MFM, or perinatology) and Obstetrics / Gynecology. His internationally recognized work, in the forefront of the development of techniques for the early diagnosis and timely treatment of pregnancy complications, brings together a combination of placental science, advanced technology and proactive interventions to help women sustain their pregnancies to healthy delivery in the face of problems that challenge the unborn babies’ lives and / or their conditions after birth. A key dimension of his work is the effect of womb conditions not only on the success of the pregnancy but also on the health of the newborn into adulthood. Dr. Kofinas began his studies in Greece and completed them at Bowman Gray School of Medicine, now part of Wake Forest School of Medicine, North Carolina. For five years he taught at Bowman while conducting extensive research on the human myometrium (the middle layer of the uterine wall) and human labor, as well as pioneering research on the blood circulation of the fetus, uterus and placenta.In 1994 he began working in New York City, concentrating on fetal research and treatment. In working with thousands of patients he and his clinical team have achieved pregnancy treatment success rates far in advance of national averages. He is regularly invited to speak at conferences around the world. New York magazine has frequently featured him as one of the leading physicians based in the New York area.